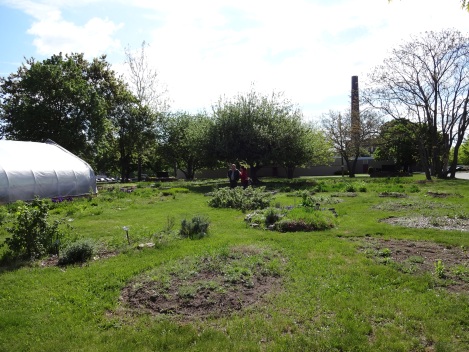 America’s self-image is founded in part on the nation’s rapid rise to industrial preeminence by World War I. While there is no single birthplace of industry, Lowell’s planned textile mill city, in scale, technological innovation, and development of an urban working class, marked the beginning of the industrial transformation of America. Visitors can see today the working components of this early manufacturing center—the dam and nearly six miles of canals that harnessed the energy of the Merrimack River; the mills where the cloth was produced; a boardinghouse representing the dozens of like buildings that housed the workers; the churches where they practiced their faiths; the ethnic neighborhoods. These are the roots of American industry and of American working people.

The Lowell story is as much about change as about beginnings. Just as the city today reflects the de-industrialization happening across our northern states, so its historical structures represent one of the greatest transitions in American social history. This was the shift from a rural society, where most people adapted their lives to natural cycles, to a society in which people responded to factory bells, where work was the same year round and did not cease at nightfall. In these pages historian Thomas Dublin tells of the changes undergone by Lowell: the city’s role in the Industrial Revolution; the transition on the mill floor from Yankee women to immigrant men and women; the transition from water power to steam; Lowell’s decline following the shift of textile capital to the South.

Nowhere is Lowell’s transformation more vividly seen than in its workforce. Successive waves of immigrants came to Lowell, taking the lowest paying jobs as those who had come before climbed the economic ladder. One of the most moving of the city’s monuments is the group of 20 bronze bricks laid in the sidewalk that leads to Boott Mills. Inscribed on them are names like True W Brown, Patrick Kelley, Charles Demers, Karoline Alrzybala kinds of Yankee, Irish, French-Canadian, and Polish names still found in Lowell. In this unobtrusive setting is distilled the spirit of the city: At places like Boott Mills, one can touch Lowell’s past. Its people remain the vital connection to the generations who labored here.

Field team clears severely overgrown pathway! Final big project of the summer season. #before #after
Shout Out to Branching Out Alumni Sadiya for coming to support our preservation efforts today! ♥️ #matherfamily #youthsupport #npsnyc #npsfamily #boprocks
Teamwork makes the dream work 🤞🏾👫⛏
2 weeks left in the program. Time for some weekly reflections ✏️📝!
⚒⛏Week 4 of the program is being dedicated to @morristownnps Thank you for having us! 🌲🌱
Branching Out cleaning up the landscape @morristownnps 🌱
Early morning sucker pruning ☀️
40 bags later, caring for fort jay 🍂
Field Team member Michelle priming & painting boards for fort jay porches. #nycyouth #cte #mather #nps #trades
🤷🏾‍♂️🔨
Mather teachers working hard this morning with Branching Out 🔨 #workingwithstudents #teachers #CTE #Matherhighschool #nyc #landscapefeatures #doe
Today’s carpentry preservation project for @weirfarmnhs ! #nps #preservation #mather #fence #nyc
Sally Splitting Cedar for split rail fence pickets to bring to @weirfarmnhs
Branching Out Supports 2019 Woman’s World Cup Champions 🏟🇺🇸 #worldcup #woman #2019 #FIFA
Branching Out Field team & Building Up Crew collab for Orientation week on @govislandnps 🌱🔨
🌱Day 1 of Branching Out Summer Field Team 2019 🎉🌱
Carpentry Tuesday’s with Branching Out 🔨⛏
🌼Spring is in the air 🌱
A beautiful day in NYC to be at the park! #branchingout #mather
How could Branching Out be raking leaves and not jump in a pile!?🤷‍♀️🤣🍂🍁💨