Although the field team’s main project at Longfellow House was planting Winter Gem boxwood, buxus microphylla japonica, my favorite part was the weeding because it allowed time for them to be in sight without too much movement so I could get some really nice pictures. 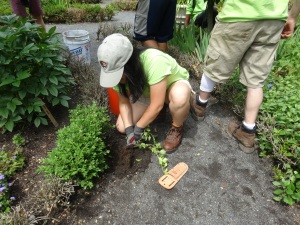 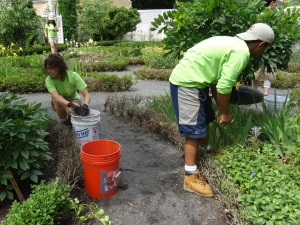 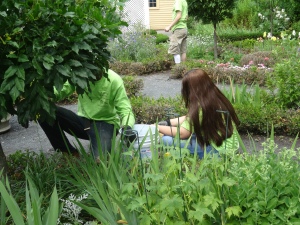 A big part of planting the boxwood was digging trenches along the outer edges where the stone dust path was. We were doing this because the roots of the boxwood would be growing into the rocks underneath the stone dust which doesn’t help it since the stone dust does not contain water and air bubbles (like soil does). First we would scrape the stone dust surface aside and then dig 4 inches down; trench was about half a foot wide. Another role was sifting the rocks to separate the stone dust out. So the planting procedures were quite similar to the one in the blog that I wrote about in week 3 of my internship. After we removed the dead boxwood and dug a hole, we branched out the roots by pruning the bottom (if the roots grew too much) and fluffed the sides gently with the tips of the pruners. We put some compost in the hole and then we matched the soil level of the boxwood with the ground. Lastly, we put compost in the trenches. Some other jobs related to the project included pruning 4 inches off the tips of the boxwood (before we planted them), raking out the sifted stone dust evenly, pruning out the deadwood in the existing boxwood, and adding a bit of compost to the old boxwood. ( Sifting the rocks, pruning the deadwood and adding compost to old boxwood in the next three pictures.) 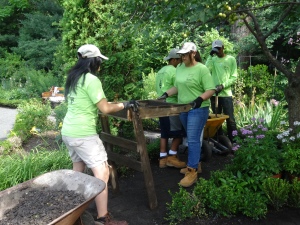 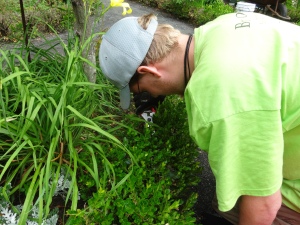 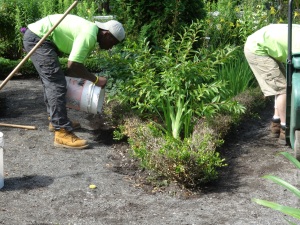 Although I didn’t get to see everyone at work, I am glad to hear that Longfellow was Theresa’s best park so far. Hopefully other people felt the same way and enjoyed working with me. But I am excited to see the blog they’re going to put up about their week here. So look out for it!

5 responses to “Learning with the Field Team”

Field team clears severely overgrown pathway! Final big project of the summer season. #before #after
Shout Out to Branching Out Alumni Sadiya for coming to support our preservation efforts today! ♥️ #matherfamily #youthsupport #npsnyc #npsfamily #boprocks
Teamwork makes the dream work 🤞🏾👫⛏
2 weeks left in the program. Time for some weekly reflections ✏️📝!
⚒⛏Week 4 of the program is being dedicated to @morristownnps Thank you for having us! 🌲🌱
Branching Out cleaning up the landscape @morristownnps 🌱
Early morning sucker pruning ☀️
40 bags later, caring for fort jay 🍂
Field Team member Michelle priming & painting boards for fort jay porches. #nycyouth #cte #mather #nps #trades
🤷🏾‍♂️🔨
Mather teachers working hard this morning with Branching Out 🔨 #workingwithstudents #teachers #CTE #Matherhighschool #nyc #landscapefeatures #doe
Today’s carpentry preservation project for @weirfarmnhs ! #nps #preservation #mather #fence #nyc
Sally Splitting Cedar for split rail fence pickets to bring to @weirfarmnhs
Branching Out Supports 2019 Woman’s World Cup Champions 🏟🇺🇸 #worldcup #woman #2019 #FIFA
Branching Out Field team & Building Up Crew collab for Orientation week on @govislandnps 🌱🔨
🌱Day 1 of Branching Out Summer Field Team 2019 🎉🌱
Carpentry Tuesday’s with Branching Out 🔨⛏
🌼Spring is in the air 🌱
A beautiful day in NYC to be at the park! #branchingout #mather
How could Branching Out be raking leaves and not jump in a pile!?🤷‍♀️🤣🍂🍁💨
%d bloggers like this: