This week, our project is in Lowell National Historic Park. On our first day, we started off by having a tour about the canals that run through Lowell. The tour and short movie we watched, stresses the importance of industrialization in America. We learned about Lowell’s old textile factories and how it became an industrialized city. This city is named after Francis Cabot Lowell who memorized and built the power loom which started the industrial boom in Lowell. From the tour, we also learned that the canals powered the factories and helped transport goods until railroads were made. The canal creates a pathway for transporting yet mules were the one who helped drag the boats to each destination.

The next day, we pulled out desired plants from the garden and placed them inside bio-degradable sacks. The sacks will decompose inside the soil within 1-2 years and the plants will be able to survive until then. The sacks of plants will be given to the public. People who are interested in plants and or would like to plant them, they may bring them home for FREE! We then started pulling out the rest of the weeds in the garden. Due to the rain, we had to stop early. The day was windy and raining. We tried our best to finish as much work as possible.

Then we have Wednesday. The day was sunny and breezy. It was a perfect day for work. That day we took out grass, weeds, and rocks from the empty patch. Bill helped us a lot by using the bobcat to turn up the soil so we could rake up all the vegetation that was left in the garden. Later, we leveled out the dirt. With Billy’s help with the bobcat, the work became more efficient because he helped spread the loam on the patch for us. We continued to level out the patch using a rolling tamper. Some of us also assisted Janice with digging out day-lilies. Together, we enjoyed the weather, each others company, and enthusiasm for work that day.

On Thursday we finished leveling out all of the loam we had started to spread on Wednesday. We also raked up all of the soil in order to hand throw seeds all over the new loam we had laid out and leveled out. We then hand broadcasted the seeds over the loam, the seeds that are specially made to retain water and survive through many different natural factors. We through them all throughout the soil patches and then flattened them with a rolling tamper. After we finished in the garden we then went on a tour of the garage in the site and saw a really cool room downstairs where Billy kept all of his personal tools and nurtured plants back to health.

In all it was a very fun week and we can’t wait to come back and see how the new lawn we have created will look like.

Billy explaining the work to the field team. 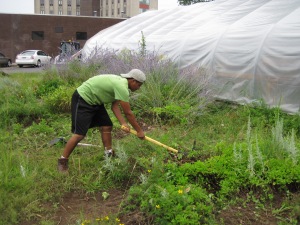 Stephen working with the pickaxe.

The field team racking out the weeds.

The field team leveling the ground. 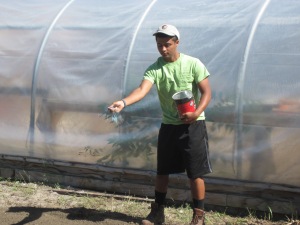 Spreading seed on the over the ground.

Tamping the seed into the ground.

Field team clears severely overgrown pathway! Final big project of the summer season. #before #after
Shout Out to Branching Out Alumni Sadiya for coming to support our preservation efforts today! ♥️ #matherfamily #youthsupport #npsnyc #npsfamily #boprocks
Teamwork makes the dream work 🤞🏾👫⛏
2 weeks left in the program. Time for some weekly reflections ✏️📝!
⚒⛏Week 4 of the program is being dedicated to @morristownnps Thank you for having us! 🌲🌱
Branching Out cleaning up the landscape @morristownnps 🌱
Early morning sucker pruning ☀️
40 bags later, caring for fort jay 🍂
Field Team member Michelle priming & painting boards for fort jay porches. #nycyouth #cte #mather #nps #trades
🤷🏾‍♂️🔨
Mather teachers working hard this morning with Branching Out 🔨 #workingwithstudents #teachers #CTE #Matherhighschool #nyc #landscapefeatures #doe
Today’s carpentry preservation project for @weirfarmnhs ! #nps #preservation #mather #fence #nyc
Sally Splitting Cedar for split rail fence pickets to bring to @weirfarmnhs
Branching Out Supports 2019 Woman’s World Cup Champions 🏟🇺🇸 #worldcup #woman #2019 #FIFA
Branching Out Field team & Building Up Crew collab for Orientation week on @govislandnps 🌱🔨
🌱Day 1 of Branching Out Summer Field Team 2019 🎉🌱
Carpentry Tuesday’s with Branching Out 🔨⛏
🌼Spring is in the air 🌱
A beautiful day in NYC to be at the park! #branchingout #mather
How could Branching Out be raking leaves and not jump in a pile!?🤷‍♀️🤣🍂🍁💨
%d bloggers like this: